REQUEST FOR A HEARING

On July 21, 2016, HPD presented a proposal that would deprive shareholder-owned Housing Development Fund Corporation (HDFC) cooperatives of their property rights. We ask you, Gale A. Brewer, for your support. We are 100,000 highly motivated voters. We would like to make our own presentation, one that responds to and comments on the presentation made by HPD.

It was in your office, at the Manhattan Borough Board Meeting on July 21, 2016, that HPD first presented its proposed changes to the regulations governing HDFCs. As you know, many of us have objected to the fact that the proposed new regulatory agreement was conceived behind closed doors, with no input from HDFC residents. Thus far HPD has been completely opaque in its decision-making and deaf to our concerns and experience. We are disappointed by their failure to understand the basic elements of the HDFC program. We ask that you honor us — HDFC shareholders and your constituents— with a hearing in your office. This time, HDFC shareholders will talk.

You say that your office supports transparency: our presentation will demonstrate the hidden agenda of the HPD regulatory agreement. You say that your office supports accountability. We will show the effects that this agreement will have on those living in HDFCs. Maintenance will go up and force our lowest-income shareholders to leave the city —the exact opposite of what affordability is supposed to be about.

In the January 18, 2017 visit to your office regarding our concerns about not including shareholders in drafting new regulation affecting them, one of your staff members said that they couldn’t do outreach to “40,000” people. We believe that any rules in our democratic society must be made with input from those who will have to live by those rules. In the January meeting at your office your staff acknowledged that this proposed agreement has nothing to do with helping distressed HDFCs and that the only purpose of monitors is to control sales, not, as is disingenuously said by HPD, to improve or smooth the everyday governance of a coop, the overwhelming majority of which are well-run. Virtually all of the policies proposed in this agreement are repressive. Staff in your office discount HPD’s malfeasance as “details.” We call it “our lives.” In the meeting at your office, when we asked why HPD would be allowed to break the contract we have until 2029, a staff member said that HDFCs are public housing. This is not true. HDFCs are NOT public housing. HDFC coops were formed under Article XI of the New York Private Housing Finance Law (PHFL). We are not public housing; we own our buildings and the land under them. Why is your office providing information that is incorrect? Who is your office representing? We urge you to think about this.

Your office has traditionally been against “one-size-fits-all” policies, yet that is the approach HPD has taken with this proposal. We agree with you and with HPD’s stated policy of keeping HDFCs affordable. But good intentions without coherent policy equal destructive actions. You have said “these developments have always been purpose-built to provide affordable housing to ‘persons of low income.’” This comment contains three errors: (1) HDFCs are coops, not developments; (2) HDFC buildings were not purpose-built, they were already standing, though abandoned by landlords, banks, and the City in poor condition; and (3) HDFC buildings were sold to their tenants, who represented a range of incomes and classes (middle, lower-middle and low). Regarding the lower-income shareholders in HDFCs, should their buildings not sign HPD’s new regulatory agreement, they will be unable to pay the jump in maintenance and will be forced to sell and leave the city. The HDFC model holds maintenance low so that the lowest-income shareholders can afford to stay in NYC for life.

And yet we hear inflammatory statements from your office like the following: “Over the years, loopholes in HDFC rules have undermined these developments’ purpose.” Is that really how you see us? Your implication is that HDFC shareholders are pulling a fast one, when in fact we have worked hard to protect every shareholder from rising costs. The policy changes proposed in HPD’s new agreement can be shown to make no sense and still your office offers unconditional support of HPD. Why? We understand that points of view can differ, but can you really be in full accord with such a flawed proposal? We ask that you take this opportunity to host a presentation in which we respond to HPD’s proposal.

The agenda for your third “State of the Borough” meeting, on February 12, 2017, is “Get involved in the New Era of Activism. ” Does your support of activism extend to us, HDFC shareholders? We object to a proposal that is unfair in its assessments, flawed in its facts, incoherent in its logic, and without transparency or care. We are getting involved — but are you getting involved? We are your constituents; there are 100,000 of us, we are highly motivated voters, and we would like to believe that you truly do support activism.

To this end, we ask that you host a hearing during which shareholder’s representatives can speak. We would ideally like to make our presentation before the end of March. Can we confirm, by February 12, a date for our presentation, so that it can be publicly announced at your third State of the Borough meeting?

PhD in philosophy and Master in Architecture 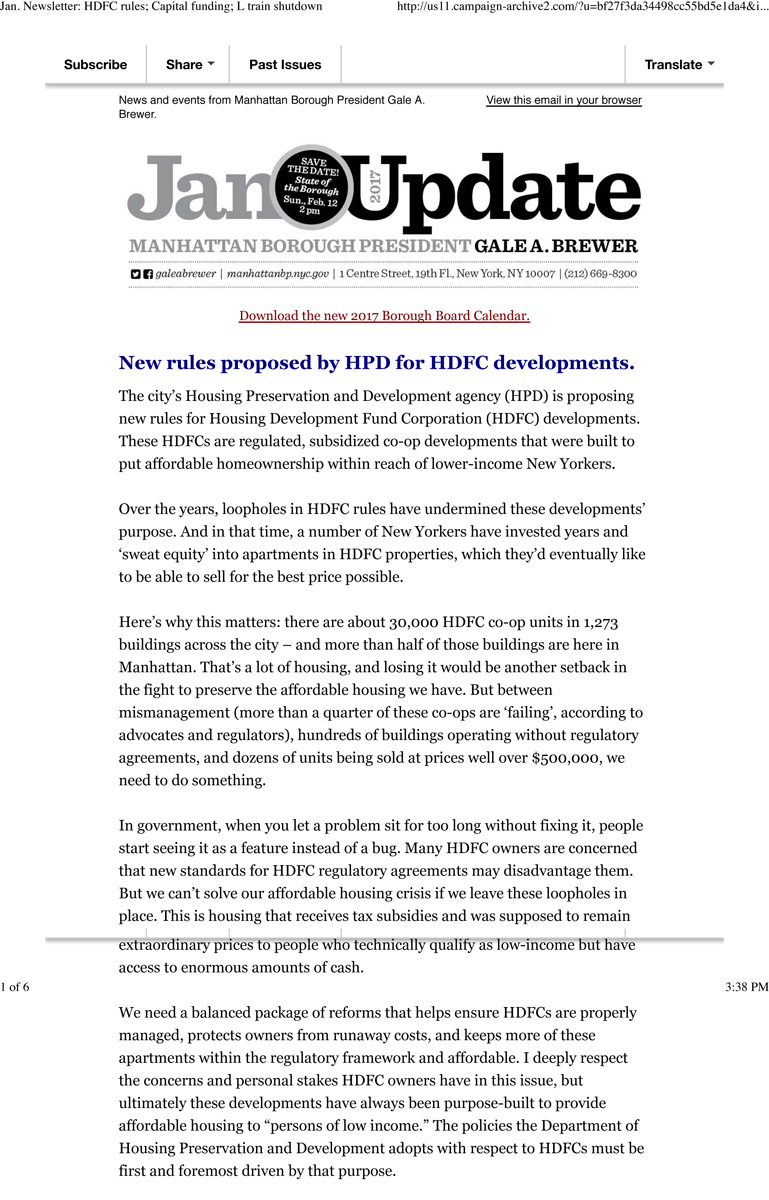