On 3-2-17, Sherif Soleman, director of State legislative Affairs (the City of New York Office of the Mayor), sent a letter to 119 Washington Avenue Albany, New York, 12210, that contained a proposal to amend current law on Housing Development Funds Corporation. Previously, the office of the Mayor and HPD had been writing a draft to a new regulatory agreement for HDFC. This agreement violates myriad laws and civil rights.

Let me name some of the different anomalies that the Regulatory Agreement by the City/HPD for the Housing Development Fund Corporation (HDFC) contained, including: 1. a threat to take away a tax exemption that doesn’t expire until 2029, 2. taking ownership away from shareholders by introducing a monitor who approves all sales and increases operational costs, 3. changing income limits, 4. controlling leasing conditions that are determined by a cooperative’s by-laws, 5. introducing flat flip taxes that are currently determined by a cooperative’s Board of Directors, and 6. introducing two types of shares within one coop community. This current proposed legislation now goes further in limiting the Constitutional “right to property” of HDFC shareholders, who do indeed own their buildings and the land under them. With this new legislation HPD will be able to remove the board of directors, set different income-limit requirements and flip taxes, approve the sales of shares, change the definition of “low income” for new residents, all of which reduces the possibility of sales and guts owner equity. Mayor de Blasio is trying to use Albany as a back door to his agenda. Here’s what happens to our homes if this ACT is passed:

2.1. HDFC coops become not-for-profit by force. There are two legislations controlling HDFC buildings: The Private Housing Finance Law (part of the Business Corporation Law) and the Not For Profit Corporation Law. Private Housing Finance Law gives autonomy and independence to the HDFC. The purpose of Mayor de Blasio’s new ACT is to eradicate the private part of our HDFCs. For example, with this amendment the Board will not be able to approve sales (unless it has permission from “The agency”). This is an indirect way to convert shareholders into tenants. In addition it converts us into charitable corporations — except that HDFCs are for-profit and not charitable. This Amendment switches the HDFC Model into a 100% not-for-profit.

2.2.The purpose of HDFC housing is changed and low-income housing redefined in a single stroke of the pen. The words “low income” in the ACT bill employs the common understanding of “low income” to mean “people who make little money.” This is different from the legal definition of “low income” in current law, which means “those who cannot afford a house at market rate.” This amendment tries to turn the common understanding of “low income” into law. The HDFC model, however, was not created for those who made little money because as a corporation, HDFC shareholders have to be able to improve, invest in, and maintain their property, which involves renovation, restoration, and keeping up with NYC building codes and standards. This requires endless investment in infrastructure and facade work.

Those who bought their apartments under certain rules, in buildings that have followed those rules, suddenly find that the bottom has dropped out of their property. For without warning, without any interaction or information, the middle-class and working-class people who bought and live in HDFCs will see the foundations of their successful buildings forever changed. Their low maintenance, sustained by apartment sales approved by their boards, usually lower than market rates, will vanish and HDFC owners will be forced out of their own buildings. This will happen to 30,000 New Yorkers.

If one survey the demographics in HDFC buildings one will see that a huge percentage are entrepreneurs and professionals who have the strength, time, and means to invest and redo their houses. The Mayor and HPD disregard sweat equity as something of value, but communities and homes were improved by those who had the guts to purchase and bring back properties that the City deemed of no value. In those days there was no need of affordable housing because all New York, dirty and unsafe, was affordable. HDFC shareholders helped bring back whole communities and increased the value of their homes, neighborhoods, and the City.

3-Why is the Office of the Mayor and HPD proposing this bill?

3.2 The Office of the Mayor and HPD are proposing this bill to circumvent possible law suits. HPD and the Office of Mayor the Blasio realize that multiple aspects of the Regulatory Agreement they drafted for HDFCs are in contradiction with the legislation regarding HDFCs, (Article XI Private House Finance Law). HPD and the Office of Mayor the Blasio, instead of adapting the Regulatory Agreement in a fair and legal way, are trying to change the law. They want the State, to rig the law for them, by passing this ACT which will change the status of privately owned homes into not-for-profit housing units.

This bill is not positive. It is negative. The Summary reads: “This new section will impose restrictions . . .”   This amendment and the previous regulatory agreement cooked up by HPD were written without consultation with those who must suffer the restrictions: HDFC shareholders. The language and the content of this proposal is punitive (fees and fines are introduced to HDFC shareholders, their boards removed without clear criteria). Instead of respecting shareholders this law is victimizing shareholders. I believe the role of government in a democracy is to work in favor of the individual and their communities and not to dictate, force, and impose.

HDFCs shareholders (through the HDFC Coalition) have had conversations with HPD, and when members of the HDFC Coalition met with the Mayor on March 28 2017, he was listening and conciliatory yet on March 2, 2017, the Mayor’s office sent out this ACT to Amend current Article XI affecting HDFCs. On October12 2017  in a Town hall meeting, when Susan Lealike, a shareholder asked the Major about the ACT, he said “I have no idea what this bill said” to what she replied: “Well, your name is on it.” 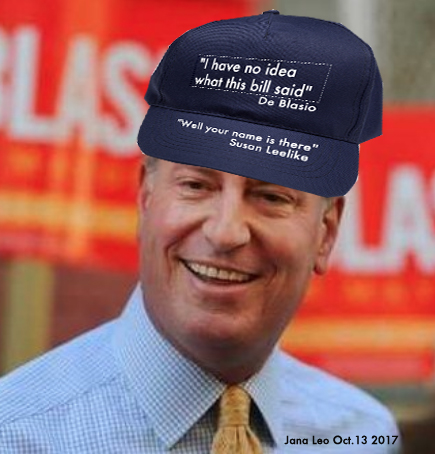 This bill stands to grievously undermine the financial and emotional well-being of over 30,000 New Yorkers and their families, people who are not rich. It cares nothing for the well-being of the communities upon which it will be imposed. It takes away our Constitutional right to own property. The City has referred to our homes as “valuable housing stock.” We want you to help us make sure that the 30,000 houses—which we own—are not commandeered by the City.