On January 13, 2015 the de Blasio administration ordered the Economic Development Corporation to “choose HR&A on a sole source basis.” Former employees of HR&A Advisors occupy or have occupied the most important positions in urban, city planning and housing in the City of New York:

1-In the position of Commissioner of HPD Housing Preservation and Development:   Maria Torres Springer (wife of Jamie Torres-Springer partner of HR&A Advisors)

2-In the position of President of Economic Development Corporation EDC:  Maria Torres Springer

3-In the position Commissioner of NYC Department of Small Business Services at City of New York Government:  Maria Torres Springer

4-In the position of chair of the City Planning Commission:  Carl Weisbrod, consultant and partner of HR&A Advisors, appointed by Mayor de Blasio on February 7, 2014

5- In the position of Director of Department of City Planning NYCDCP:  Carl Weisbrod, who was a real estate consultant and partner of HR&A Advisors

6-In the position of First Deputy Mayor:   Anthony Shorris, who worked at HR&A Advisors briefly in the early 1990s

7- In the position of President of the New York City Housing Authority: Shola Olatoye, appointed in March of 2014. Olatoye worked for HR&A Advisors from 2001 to 2007.

This tight relation between the firm HR&A Advisors and De Blasio administration is something well known. Andrew J. Hawkins write in Crain the article HR&A Advisors is the chosen consultancy [1]. 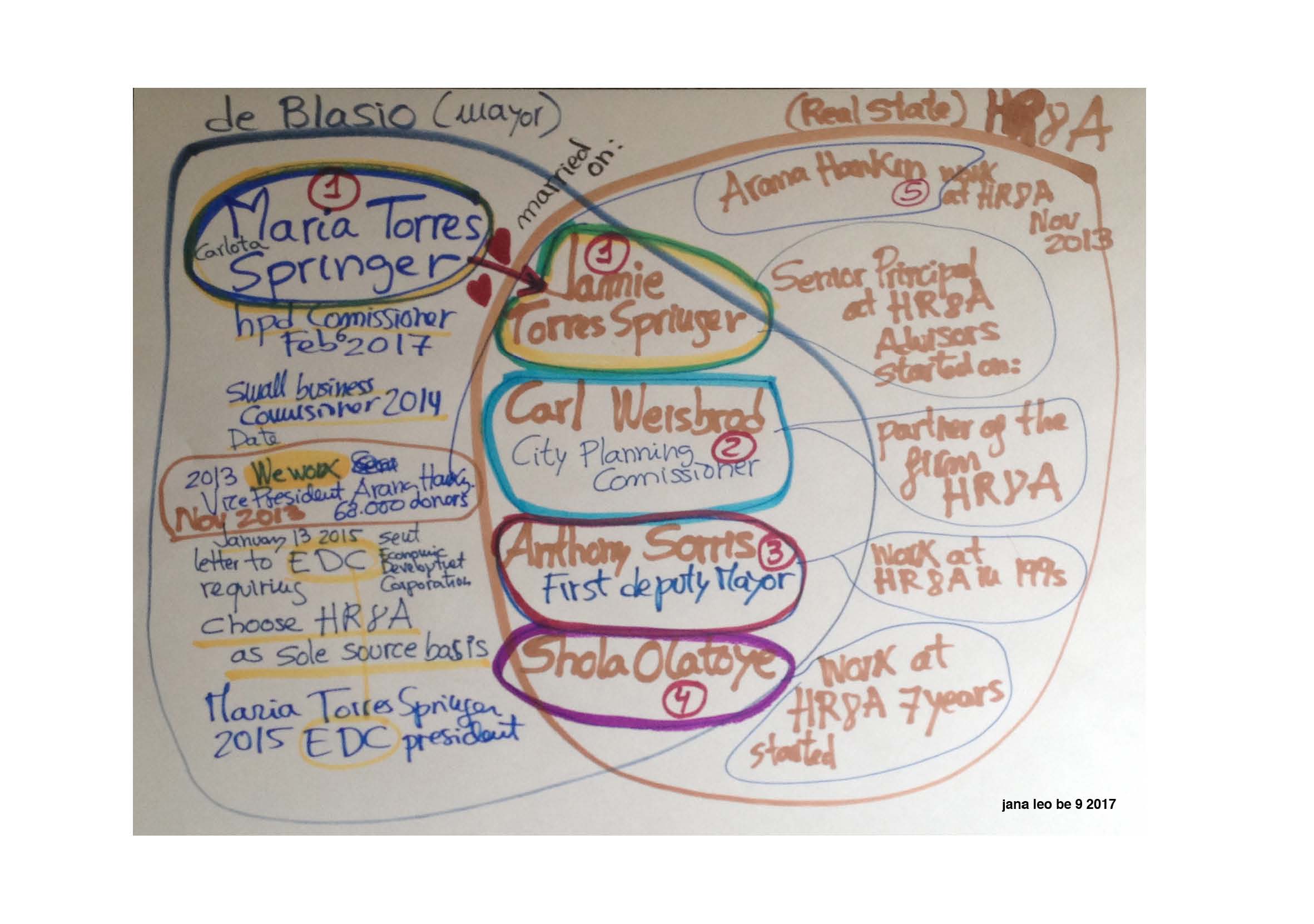 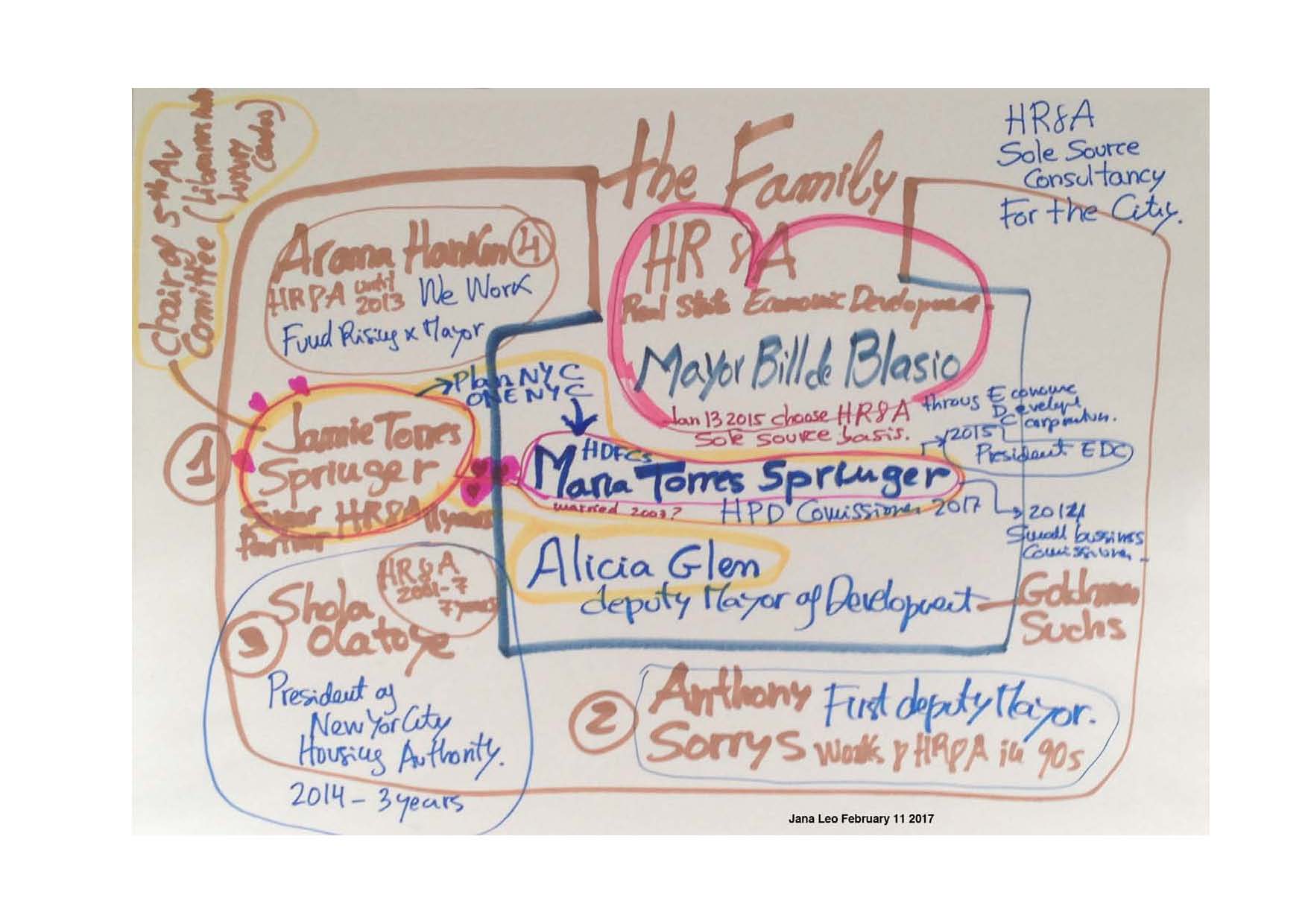 An article by Sally Goldenberg, published on January 17, 2017 on www.politico.com, reads: “In a phone interview Monday, Alicia Glen said she opted to elevate her aides, rather than conduct a broader search for Been’s replacement, because of uncertainty facing the city’s housing plan under the incoming Trump administration. ‘You always want to look at the family first, and if there’s great people in the family and people like James, (who) demonstrated (his) ability to step up, you want to reward those people,’ she said.”

If what this article says is true, the criteria that Alicia Glen, Deputy Mayor for housing and economic development, used to choose the new Housing Preservation and Development HPD commissioner was that she is part of the family. 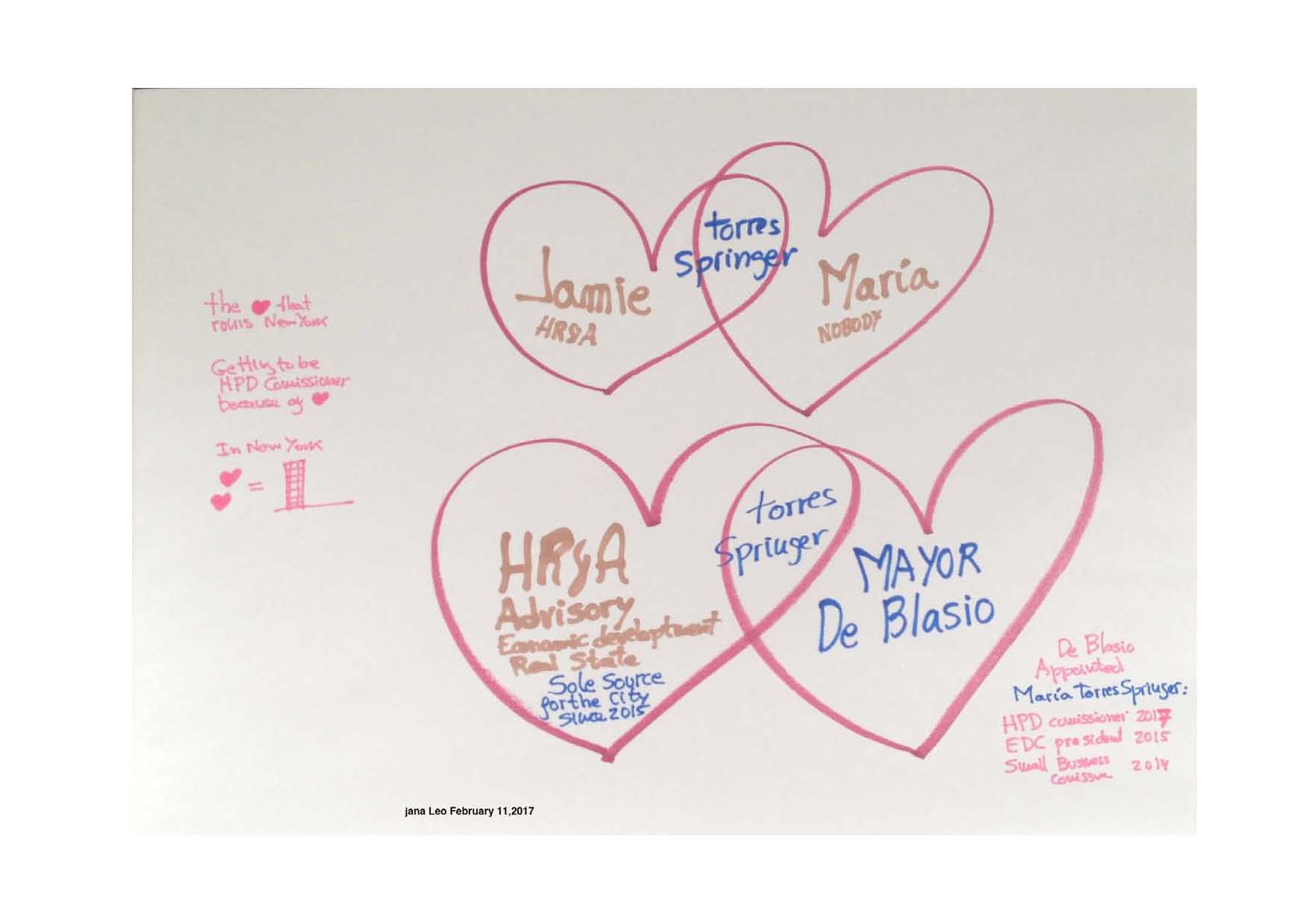 Mayor de Blasio appointed Maria Torres Springer President of Economic Development Corporation NYCEDC.  Because there was an inherent conflict of interest, due to the fact that her husband was a partner at HR&A, the conflict was resolved with a technicality:  Jamie Torres Springer’s title was changed from “partner” to “employee.”  Next EDC President Will Have to Recuse Herself from Projects Her Husband is Involved In

Susan Lerner of Common Cause New York said: “I think this shows a long-standing incestuous relationship between the real estate industry and the EDC. And the EDC is a very problematic entity from a good government point of view. They are really not transparent at all . . . And are not really accountable to anybody.”[2] 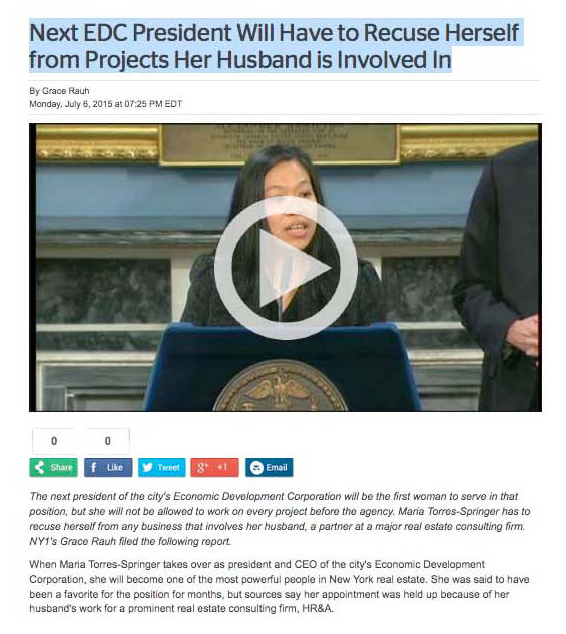 Maria Torres Stringer was appointed by the Mayor Commissioner at NYC Department of Housing Preservation & Development (HPD) in 2017. On 2015 Mayor de Blasio also appointed Maria Torres Stringer President at NYCEDC, and in 2014 de Blasio appointed her Commissioner of NYC Department of Small Business Services at City of New York Government. I found no records of important positions in housing and no important jobs not appointed by the Mayor. Looks like, her only previous job was a brief Former Chief Operating Officer (COO) at Friends of The High Line.

Is “being part of the family” the right criteria to select government officials?

What family is this?

Is there any benefit for HR&A Advisors to have former employees or employees relatives in most important positions in urban, city planning and housing in the City of New York?

Why has the Mayor appointed a single firm as consultant for the whole city?  How does this benefit the Mayor?

How does it effect the City of New York to have a real estate firm holding so much behind-the-scenes power?

How does it effect New York residents to have a real estate firm making decisions on housing, city, and urban development? 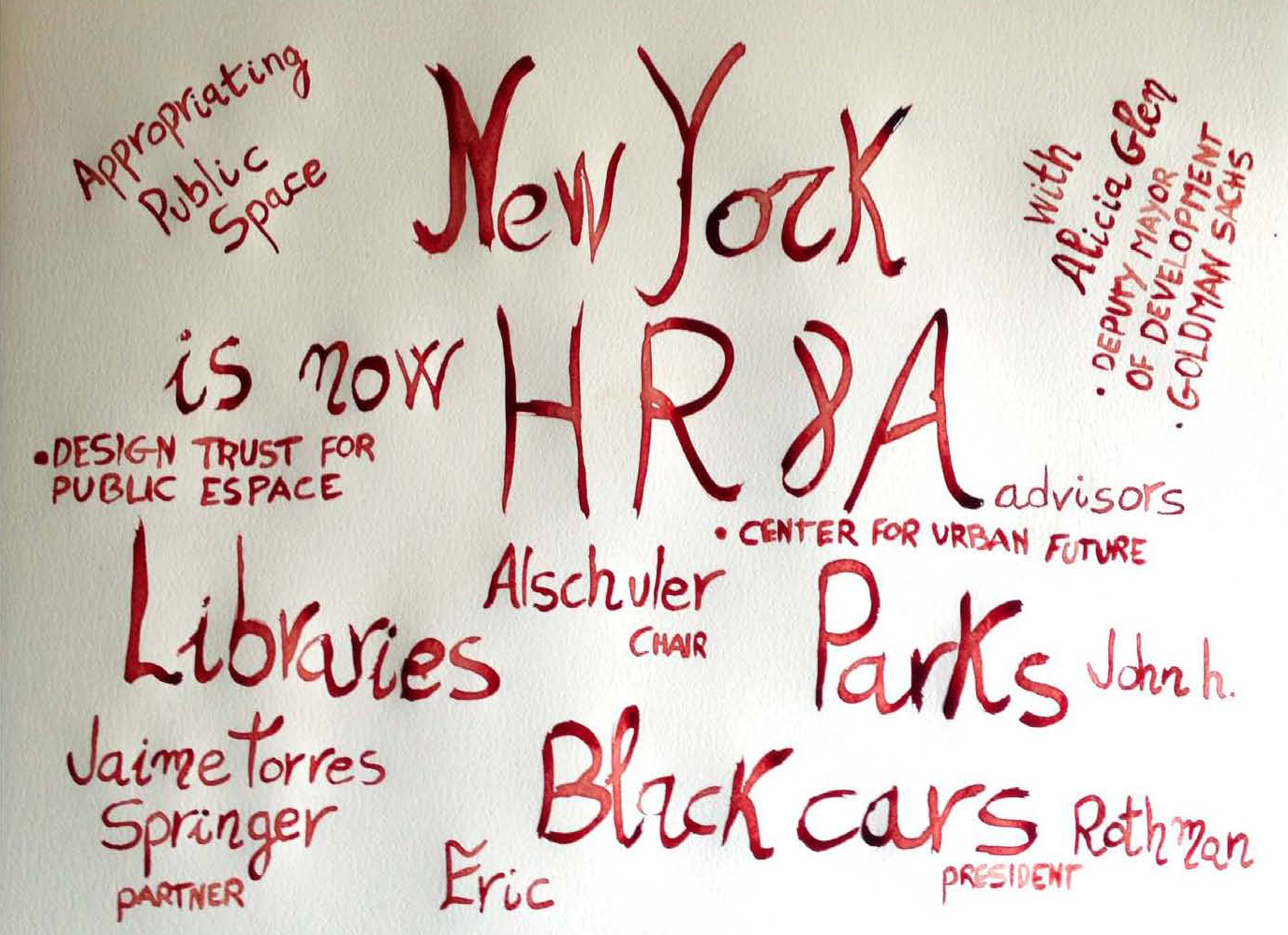 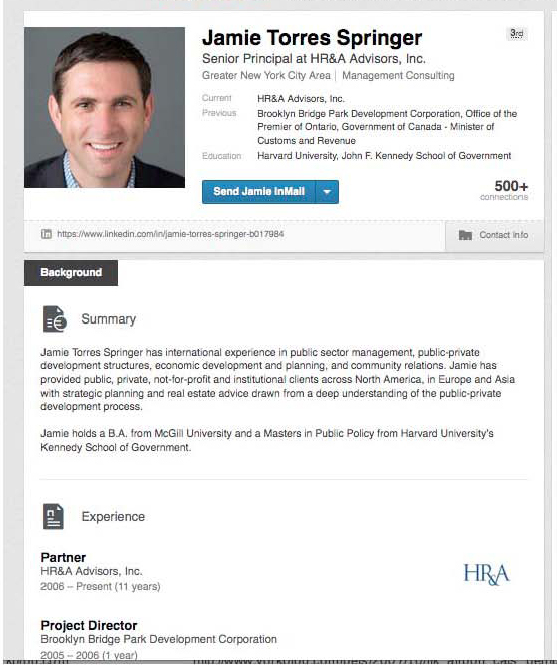 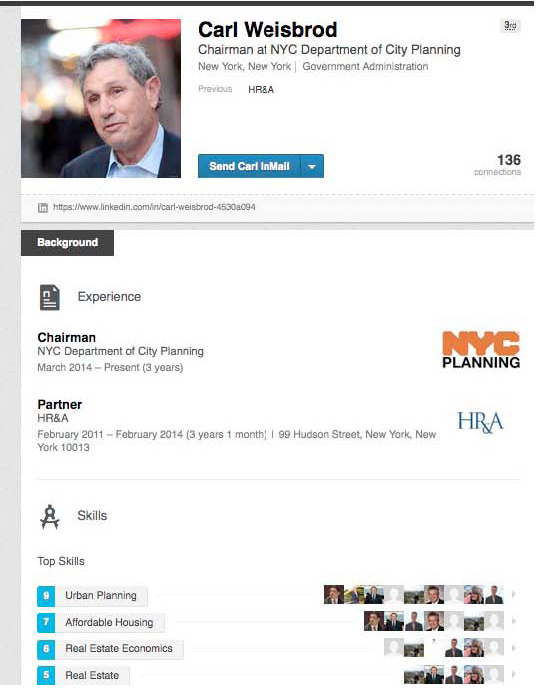 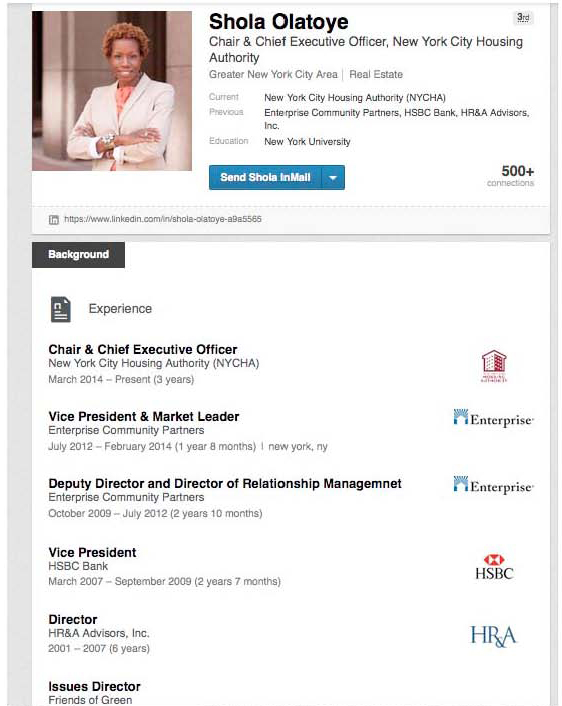 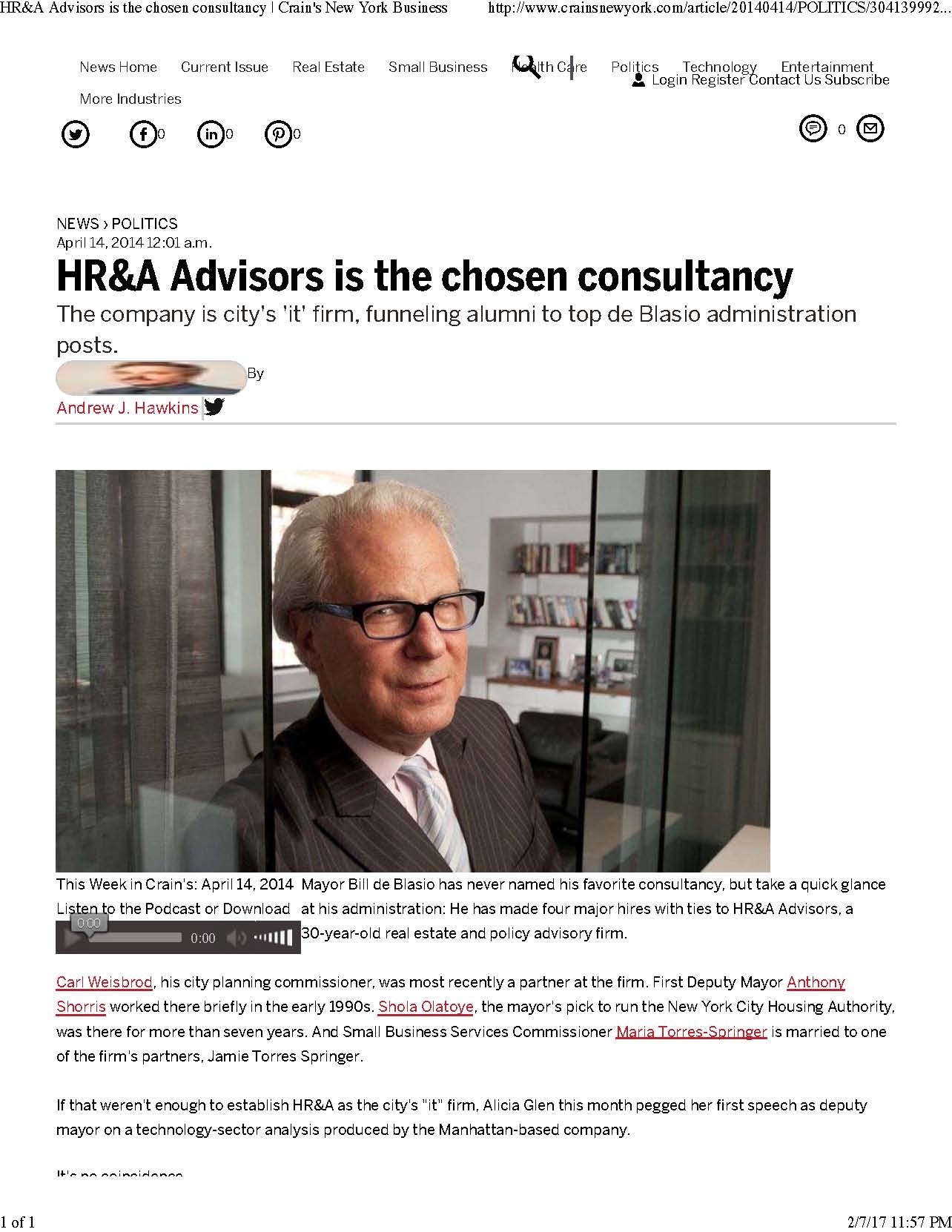 PhD in philosophy and Master in Architecture