In Rape New York, 2000-2008 I wrote about several holes in the gentrification and real estate development process at the time in New York. This includes using “rape” as a strategy for “moving” in rent stabilized apartments in an area that was under gentrification: Harlem.

Upon arriving in New York City, in 2000, I was vis-à-vis a crime-riddled building motivated by profits:

“Introducing crime into an area is part of a crude development strategy. The more sophisticated and perverse approach is to simultaneously clamp down on street crime while forcing it into specific buildings targeted for speculation. Containing crime in specific buildings reduces their value so developers can purchase them inexpensively. Not only were developers able to buy property on the cheap, the scam also made short-term, low-income rentals much more profitable than high-income rentals. Contained within targeted buildings, crime was facilitated by a lack of security in the common areas, encouraging a rapid turnover of tenants. Agents kept the security deposit, increased the rent, and charged illegal brokers’ fees, thus quickly realizing a profit from the quick turnover of tenants. If a third of the tenants in a thirty-apartment building moved annually, income doubled, yielding up to an extra one hundred thousand dollars. Eventually, the building would fall completely vacant, and was no longer subject to rent stabilization laws.” Page 41 Rape New York (New York: Feminist Press 2011) 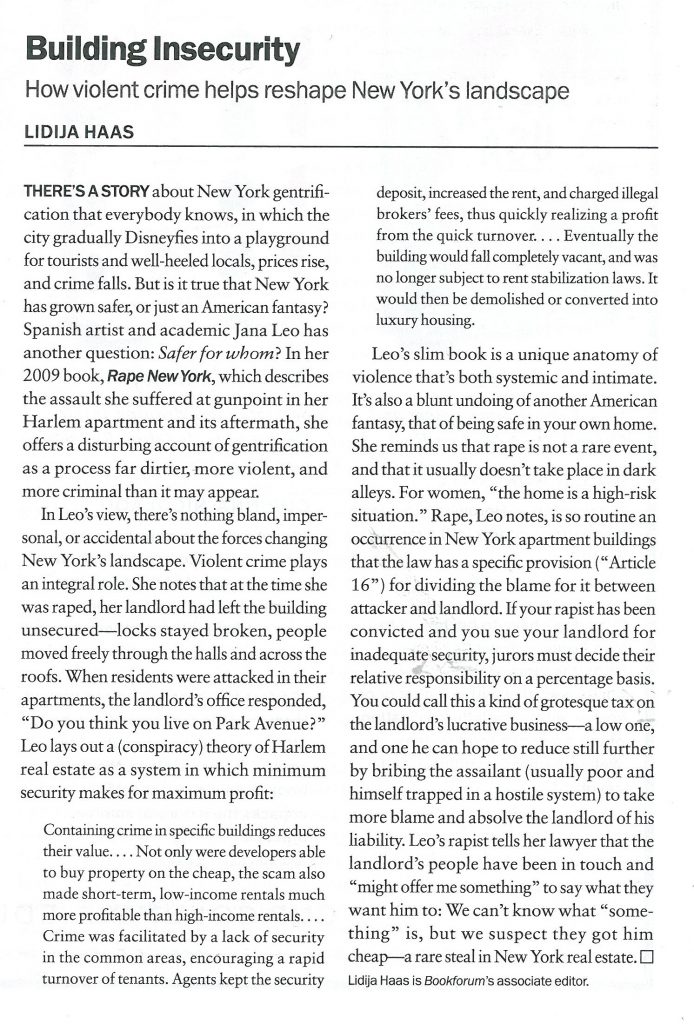 An area targeted for real estate development is going to be developed sooner or later. This is inescapable but the when and the how are uncertain. During the transition, from undeveloped to fully develop a few get rich; most get hurt.

The length of the transformation varies from a few years to several generations. Strategies go from direct –cutting basic services and harassing to perverse operations of criminal complicity.

There is nothing intangible about real estate developments. The objective is clear: speculation; the mechanisms fraudulent. The cost for displaced residents and the effects on victims on an individual level exposed the dirt of the operation in small scale.

Here is an example that I personally observed in Harlem in 2000. A simple two-step strategy:

ONE: crime concentrates. Crime concentration leaves room for real estate developers to start working. The results are proportional to the level of concentration. The most profitable case will be an area free of crime with a few bad spots, specific buildings, targets. The presence of Police in the streets increases. The result is paradoxical; it is safe to walk in the streets but dangerous to be indoors. By cleaning up crime in the street and bringing it into buildings, the neighborhood appears safe and new residents can start filling up the new condos.

TWO: crime enters the building. By not caring about security, real estate agents and landlords of rent-stabilized apartments allow crime into targeted buildings. The crime inside buildings is not understood as a public threat. The inside of a building – indoors and private—does not appear to be the clear responsibility or jurisdiction of government forces. It is also hard to recognize that home sweet home is the most dangerous place to be.

THE GEOGRAPHY OF CRIME: THE BODY-PROPERTY CRIME MAP

“By examining the relation between the frequency of violent crimes against individuals and nonviolent crimes against property, and their location in Manhattan, one can see a clear violent-crime zone and nonviolent-crime zone. The mental boundary that must be crossed to harm a body is mirrored physically by 110th Street at the northern edge of Central Park. This street marks the border between an affluent area and a lower-income level neighborhood. Most crimes involving bodily harm, such as murder, rape, and robbery, occur north of 110th Street, in Harlem. It is not that Harlem suffers more crime than other areas in Manhattan, but the crimes are more severe.” Page 91 Rape New York (New York: Feminist Press 2011)

“Looking at U.S. Bureau of Justice statistics, serious crimes in general have decreased. But while homicide, robbery and assault rates have declined, rape and burglary have remained stable for the last 15 years. Burglary and rape are crimes that occur mostly in or around the home. Burglary is breaking into a house or other building with the intent to commit theft. Perhaps the presence of police in the street has pushed crime indoors. Or perhaps police efforts are not directed toward domestic crime, which is less visible than street crime.
Rape is the ultimate invasion of privacy and often happens in private or semi-private places. Rape occurs at home or is committed by those with whom the victim feels at home. One out of four women is raped in or around her own residence. In this way, rape is domestic….

…The fact that the gender of rape victims is predominately female and that traditionally, the place for women is in the house, may relate to the identification of home with a woman’s body.

…The fact that rapes relate to poverty, especially the perpetrator’s poverty, makes it, to a certain extent, a default effect of capitalist exploitation and not simply the result of mental illness.

….Recognizing the economic element in rape implies not only having to try to eradicate poverty, but also having to acknowledge how the prioritizing of wealth affects all social relationships.”

“If wealth is the primary value, the value of a person is determined by how much that person has. If the poor are considered worthless and valueless, they can be taken easily, as society fails to protect them. As crime is often a form of appropriation, crimes against the poor target their bodies,since they have little other property. As a consequence poor women, as the most impoverished, are the most vulnerable.
When looking at the number of crimes per year in different NYPD precincts in Manhattan in 2007, I started to see a pattern. In Harlem’s Thirtieth Precinct, the number of violent robberies (316) exceeded acts of nonviolent larceny (211). In the Upper East Side’s Nineteenth precinct, the number of robberies was 206, however, larceny increases nine-fold to 1,643. The number of rapes in the Nineteenth precinct is half that of the Thirtieth precinct.In Harlem, as in other lower-income level neighborhoods, violent crimes are more prominent. In the Upper East Side, as in other more affluent neighborhoods, nonviolent crimes against property, rather than against people, are more prevalent.

Looking at the NYPD rape reports for the two neighborhoods, it was clear that the chances of being raped are higher in Harlem. Perhaps a rape in Harlem, in the mind of a rapist, is seen as more “casual” than a rape committed on the Upper East Side, since the residents of Harlem are more used to being victimized, and a violent act is less likely to be reported. Perhaps the police treat rape more lightly in a poor area than in an affluent neighborhood. A rapist might consider the difference between raping a poor and a rich person, in the same way that he may consider stealing a diamond or a stereo. An affluent victim may be a challenge, a way to get the most value from a rape, but it is also a greater transgression. To rape a rich person is certainly more risky to the perpetrator, since not only is the act more likely to be reported, it will probably be investigated more thoroughly. A pattern of control and violence is created dependent on the victim’s position and ability to respond to the abuse they receive…Reflecting on it now, “difference” could potentially act as a dissuasive element in the eyes of a criminal, because it involves crossing a limit; or it might be a stimulus to a violent crime, since it is easier to envision the “other” as someone “less human.” 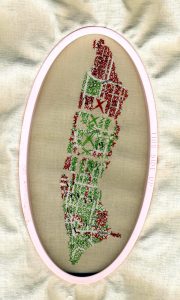 “Rape is domestic. The house and the transitory spaces within buildings are regular places of attack but they do not appear to be the responsibility or fall under the jurisdiction of government forces, nor are they the clear responsibility of city departments. There is a building department code that provides strict fire protection, but no crime protection codes exist. The only regulations required by New York City Housing Preservation and Development are limited to doors, windows, locks, and gates, and are badly enforced. Looking at the US Bureau of Justice statistics, I became aware that while serious crimes in general—homicide, robbery, and assault—have decreased, rape and burglary have remained stable for the last fifteen years. Burglary and rape are both crimes that occur in or around the home. The effort to secure buildings, tenants, and the home not only doesn’t work practically but also isolates the victim. Energy could be better spent in making the potential intruder feel exposed, rather than safe in the anonymity of transitory spaces. Home is not a safe place. Its familiarity and the routines it produces make women trustful of home, but also easy prey. I was raped in my own apartment, in my own bed.
Despite these statistics and facts, rape remains shrouded in secrecy. The sanctity of the home and the body, and the fear of the ultimate invasion of privacy, is perverted by society distancing itself from the victim. The crime occurred in your home, not mine. Shrouded in secrecy and silence, the victim is implicated as at fault..” Page 51 Rape New York (New York: Feminist Press 2011)